For those who missed it on Facebook and Twitter, I've created a new blog.  I wanted to separate out my endo and fertility-related posts to their own place, because I understand some people might not want to read them for whatever reason.  I also want to try to connect a bit more with the endo community.  My new blog is quite personal and talks about periods and fertility and surgery and that kind of thing, so don't head over there if you don't want, I understand.  It's more therapy for me than anything else.

Hereafter, I won't be discussing my medical condition on this blog.  So, if you do want to read about it, you'll have to head over to the new one!
Posted by Jen D at 6:37 PM No comments: Links to this post

Farmboy Heroes; or, Why we need more Bruce Waynes and less Peter Parkers

Email ThisBlogThis!Share to TwitterShare to FacebookShare to Pinterest
Labels: reading

Considering that I live in a pretty disastrous country and tend to freak out whenever I'm not in control, the fact that I don't have any kind of disaster kit seems pretty out of character.  I guess I was always in denial about the dangers.

The thing is, Southeast Queensland is a fairly high-risk area: storms, floods, bushfires, and tsunamis are all a very real risk of living here.  I'm far enough inland that a tsunami shouldn't be a problem for my home, but everything else is certainly a possibility.

Some of you are probably aware that there is severe flooding in several parts of Australia at the moment, particularly in Southeast Queensland.  The ABC site has an emergency page up now.  The Gold Coast is still considered fairly safe, but, well, Toowoomba didn't get any warning at all.  If the Hinze Dam overflows or breaks or something, we're close enough to the Nerang River that we would almost definitely be flooded.  As it is, we have a stormwater drain that runs through the park directly behind our house.  We're up on a rise, but we've seen it fairly far up the rise before, and it's certainly possible (however unlikely) that it could reach our house.

Here is a photo of the park this morning: 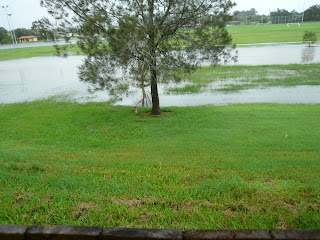 This is looking directly over our back fence (just visible across the bottom of the picture). The slope down to the stormwater is actually quite a bit steeper than it appears in this pic.  I would say we're a good 2 metres above the water level in this picture.

More photos and discussion after the jump!

The weather here on the Gold Coast has cleared up enough that we're getting entire days with no rain!  Unfortunately that means it's also quite hot and humid.  But at least I can wear cute shoes and shorts without worrying about the rain!

I'd been looking for some more shorts that are nice enough for me to wear to work for a while, because it really is too hot to wear jeans, but I can't wear skirts every day because it's too uncomfortable.  My friend, the always-fabulous Fat Heffalump, directed me to the Autograph sale, so I dropped in there when I was in Robina on Monday.  I snaffled 2 pairs of shorts for work, 1 pair of more casual shorts, 1 pair of board shorts, and a long crinkle skirt for $50 total!  I was very happy.

Today I decided to go for an all neutral colour palette which reminded me a bit of safari colours: 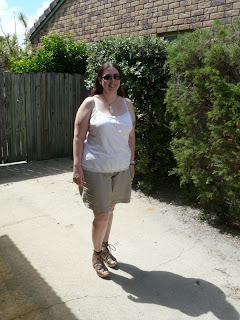 Oh, would you look at that?  It seems I bought another pair of clogs from Wittner!  I saw these on the lovely Fashion Hayley and wanted them so bad.  But I restrained myself until I could get them super-cheap, then snapped them up! 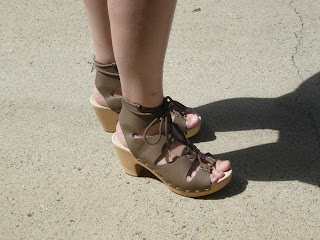 I'm also not making a New Year's Resolution, exactly.  This time of year, so many people talk about how "bad" they were over Christmas, how they "overindulged", and thus, there is a proliferation of New Year's Resolutions to lose weight.  This is, to me, harmful and wrong, and reinforces the weight-loss culture we are all exposed to every day.  There is not a single study that proves that long-term weightloss is possible and sustainable in ANY form for a significant number of people.  The majority of people who do lose weight gain it all back and more, and this weight-cycling is harmful in many ways.

So, instead of a New Year's Resolution that's impossible to keep, I'm participating in the New Year's ReVolution.  You can see the resource page here, and the Facebook Event page here.  As usual, Fat Heffalump also has a fabulous post about this topic.  Even if you don't buy in to the whole Health at Every Size (HAES) philosophy, the message I hope everyone takes away from this is to love yourselves and your bodies, because you are deserving of that love.

Each day in January, I will be trying to do something from each of these categories:


I'm hoping that if I can do these things each day through January, they will become habits and second nature.  Some of these things I do already, on most days, others need a lot more work.
I want to stress that the point of this exercise is health - physical, mental, spiritual - and not weightloss.  I don't weigh myself any more and really don't care what my weight is and whether it goes up or down.  I know that is a radical concept to many people, but it's true - I have no idea how much I weigh right now and don't care.
Have you set yourself a weightloss-related New Year's Resolution? Imagine letting go of all that stress, and just loving yourself.  What have you got to lose?