(This is actually Friday's outfit, but Blogger was down.)

For Christmas I wanted a pair of Dr. Martens boots.  I decided that months before Christmas, but Docs are a lot of money.  Christmas came and went, and I kept putting off the purchase.  About a month ago, I decided to check if the store I was going to buy them from (Platypus Shoes in Robina) would do layby.  They did!  So I went in and chose my Docs: 1460 Black Worn 8-up boots.  I put them on 6-week layby and started paying them off.  But the weather here has been getting colder and colder and I really needed a pair of winter shoes.  I'd been wearing Dave's Rivers shoes, but I discovered on Thursday that the soles of both shoes had cracked all the way through in two places.  So I had to finalise my layby and pick up my Docs a fortnight early!

For their debut I went with a bit of geek punk - skinny black jeans and a geeky t-shirt: 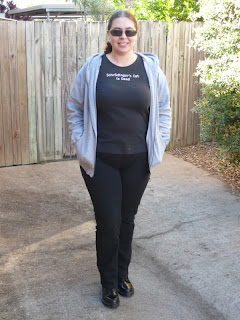 Jeans: JeansWest
Hoodie: Mambo
T-shirt: ThinkGeek
Boots: Dr. Martens at Platypus
The "Worn" collection is supposedly pre-broken-in, so they're supposed to be more comfortable straight out of the box.  Now, it's been a very long time since I broke in a pair of Docs, but I'm fairly certain these were just as painful the first day wearing them.  The thing with Docs is that, once they're broken in, they're the most comfortable boots you can own...But breaking them in is a pain in, well, the foot!  By the end of the day I had a blister on each heel and a ring of bruises above each ankle.  But I'll persevere.  I know they'll last me a long time.

Let's take a closer look at my t-shirt: 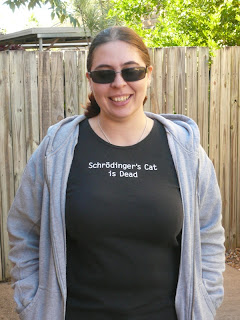 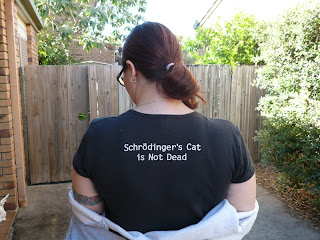 "Schrödinger's Cat" is a thought experiment.  For those of you who are Big Bang Theory fans, you'll recognise it from the Season 1 finale (although you probably knew what it was already, you nerd you).  For those of you who don't get it, feel free to refer to this helpful summary from ThinkGeek.  Nerds rule!
Posted by Jen D at 12:00 PM 2 comments: Links to this post

My blog seems to be nothing but recipes recently, huh?  Probably because that's mainly what I do with my spare time!  A recipe for Extra-Dark Brownies with Sea Salt & Lime popped up in my Tumblr feed courtesy of gastrogirl.  I thought to myself, "Sea salt and lime? Why not add tequila and call them Margarita Brownies?" So that's exactly what I did!

Preheat oven to 160C.  Line a baking pan with 2 layers of foil, leaving long overhangs, and spray with non-stick cooking spray.  Melt the butter and the 100g + 20g chocolate over low heat in a large saucepan, stirring constantly until smooth.

Remove from heat and add sugar, flour, cocoa powder, eggs, vanilla and salt.  Mix until combined.  Then zest and juice the lime into the saucepan and add the tequila.  Mix until just combined.  Pour into the prepared pan and sprinkle the flaky sea salt on top.

Bake for 25-35 minutes until the brownies are done - a skewer should come out with some mixture clinging to it but shouldn't be sticky.  Cool in the pan for 15 minutes before lifting from pan, removing foil and cooling on a wire rack.

I found it quite hard to find the unsweetened chocolate the original recipe called for.  Because the Lindt Excellence chocolate comes in 100g blocks, I decided the easiest way to get the required chocolate was to buy one block of 70% Cocoa and one block of 85% Cocoa.  Each square is 10g.  Following my recipe gives you 2 squares of 85% Cocoa to nibble on while you bake!

I added a shotglass of tequila which made the recipe too wet, so I had to add a bit of extra flour.  Even 1tbsp might be too much.  You can omit the tequila and the recipe should still work out fine.  My brownie pan is 12x11in, bigger than the 8in square one suggested in the original recipe.  After 20 minutes my brownies seemed cooked but the tequila had risen to the top and was still evaporating off, so I left them for 5 more minutes to let the tequila finish evaporating.  They turned out moist and slightly bitter and very rich.  Yum!
Posted by Jen D at 1:36 PM No comments: Links to this post