Today my dog, Phoebe, had surgery to remove a lump on her leg.  Phoebe is over 10 years old now and this is her first major health issue so I've been very lucky really.

It started a week and a half ago when I notice a really big lump on her right foreleg.  She has a few little fatty lumps so we usually keep a close eye on her various lumps and bumps, and she spends most of her time inside with us so we notice changes quite quickly.  But this was a new lump neither of us had seen before and was already about the size of a chicken's egg which was quite frightening.  I called the after hours vet and they said that as long as it wasn't bleeding, she was still eating and drinking, and didn't seem to be in pain or bothered by it we could wait until our own vet opened.  So I did that and called our regular vet the next day and made an appointment for Monday to have her regular check-up and shots which she was due for anyway, and to check the lump out at the same time.

On Monday I took Phoebe to the vet and saw a different vet than my regular one.  She was lovely though and Phoebe was very well-behaved which was good.  She checked her over and said her lymph nodes weren't swollen which was a good sign.  Then she gave Phoebe her two injections and took a sample from the leg.  She checked the sample while I waited and said that it did appear to be cancer and that we should bring her back as soon as possible to remove the lump, to be safe, and that it would cost around $1000.  So I booked Phoebe in for surgery for today.

I dropped her off this morning before work and called at 3pm to check that she was okay to come home, then picked her up at 5:30pm.  Her leg is bandaged from right up near her body down to her toes.  She had another little bandage where the IV had been (which I removed when we got home), and had been given a cute bandanna.  She's hobbling around and putting some weight on the leg, kind of hopping every third step or so, and is quite perky.  The vet said she may not be interested in dinner, but of course she was!  She had something to eat and drink and is now resting.

The vet said that it looks like the lump was a spindle cell tumor which was malignant and quite aggressive.  He thinks he got it all but he won't know until the lab reviews it - we should find out on Monday.  It was very close to a major vein and some nerves on one side.  He had to cut one of the nerves, which apparently just controls surface sensation and shouldn't affect the working of the leg.  Because of the size of the lump and its location, there wasn't enough skin to close the hole properly, so there's quite a big open wound and she is going to have a nasty scar.  We have to get the bandage changed every couple of days because of the open wound - it will be quite weepy until it closes up.  Her general health is really good - they did a blood screen to check her kidney and liver and so on and they are very pleased with her health and weight overall so that should help her to have a swift recovery.

I really hope they did manage to get the whole lump, because if they didn't and it comes back then the options are radiation therapy or removing the leg, neither of which are going to be cheap and both are quite scary.  There is a third option, of course - one which one person has already suggested we consider: euthanasia.  While I fully support euthanising an animal that is in significant, incurable pain (a decision I have had to make personally on one occasion and have been involved in on several others), I am not going to choose that option simply because it's too expensive to treat her.  Phoebe is my daughter.  She's been with me longer than anyone and we've been through a lot together.  I know she's getting old and one day she won't be with me any more but fingers crossed she has a lot longer to go just yet. 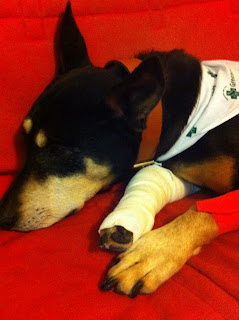 Posted by Jen D at 7:36 PM No comments: Links to this post