I know it's Tuesday but I did make this bread on Sunday, and I've had several people ask for the recipe after seeing my pic, so here it is!  This is converted to a regular recipe from the original Thermomix one in the My Way of Cooking book.  WARNING: I made this bread using my Thermomix and the original recipe and am converting it for your convenience as not everyone has a Thermomix.  I have NOT tested this version of the recipe!  And I have no intention of testing it, as the Thermomix makes life (and bread-making) so much easier.  I'll be interested to hear from anyone who does try making it sans Thermomix to see how it works out.


Warm up the milk until it is lukewarm, either in a saucepan or in the microwave, being careful it doesn't overheat and boil or scald.  Melt the butter.


Mix warmed milk, melted butter, yeast and sugar in a large bowl and leave to stand for 5 minutes to wake the yeast up and get it starting to work.


Add flour and salt and stir to combine, then turn onto a floured surface and knead for about 5 minutes, until the dough is smooth and silky and elastic.


Place the dough in a large, oiled bowl, cover with a tea towel, and let rise in a warm place until doubled in size (about an hour).

Divide the dough into three equal parts and, on a floured surface, roll each into a rope shape.  It will take a couple of minutes to roll out each one: be patient and don't be tempted to just stretch it out or you'll ruin the texture of the bread.  Let the three ropes rest on the board for 5 minutes - they will shrink back a little.

Join the three ropes at one end, plait them, then join up the other end.  Place the plaited bread onto a baking tray lined with baking paper, cover with a tea towel, and let rise in a warm place until doubled in size (about half an hour).  While rising, preheat the oven to 180C.

Brush the loaf with the beaten egg and bake for 25-30 minutes.  Allow to cool before slicing.

I assume you could also make this just in a large loaf tin, but why not try plaiting it?  It looks so pretty! 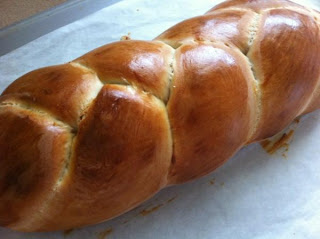 Posted by Jen D at 9:16 PM No comments: Links to this post