Week 10's topic: Share some of the memes others have created that you enjoy and take part in. What do you enjoy about the ones you’ve chosen to share?

The only literary meme I can think of off the top of my head is one of my favorite tumblrs (although it's a bit inactive these days): F*ck Yeah English Major Armadillo. For example: Week 11's Topic: Share a photo of your books. Can be your TBR pile, your read pile, favourite books, least favourite books, books to donate, gifts, or your bookcase. What’s going on in the picture and why have you chosen to share these books?

There's a lot of options for this one. I've previously shared several book photos on this blog - for example: 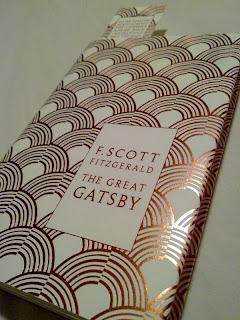 My beautiful copy of The Great Gatsby 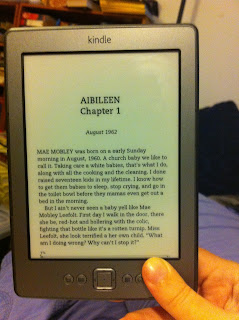 My Kindle (I was reading The Help) 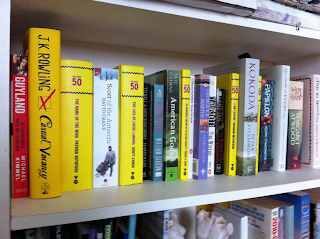 My Off The Shelf 2013 reading shelf 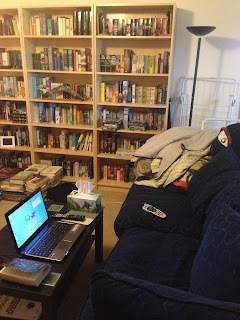 My reading spot and some of my bookshelves

We own a lot of books. Hundreds, in fact. We have 5 bookshelves like the ones in the last picture, plus 2 shorter ones (only 4 shelves each), plus the small one my Off The Shelf books and our duplicate books are shelves on. Plus a stack on the floor in the lounge. Plus some boxes Dave inherited from his grandmother. Plus our kindles. A lot of books, is what I'm getting at. You can't walk in to our house and not know we are avid readers. So choosing which books to take pictures of is difficult. So instead, here is a picture of a book I don't own, my current read, which I borrowed from a friend (and which breaks my Off The Shelf streak, but more on that when the month is over): 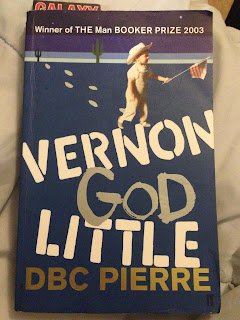 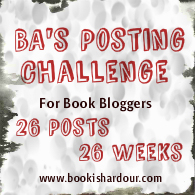 This post is part of the above Posting Challenge
Posted by Jen D at 7:29 PM No comments: Links to this post

This week's topic: When it comes to keeping place in the book you’re reading, what’s your favorite method and has it changed over the years?

I have a confession to make: I'm a reformed dog-earer. It's true. Go ahead and judge me. But I wouldn't dream of dog-earing a book to keep my place these days. I don't really remember when my habit changed but it's been years now.

Luckily, I have a huge selection of bookmarks stashed all over the house. The biggest chunk is actually Dave's own collection of beautiful, old-fashioned leather bookmarks that he's collected from all over the place: 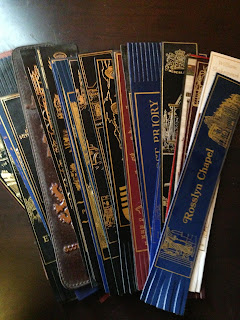 I don't use them very often though, they're displayed on one of our bookshelves. My current favorite is a dragon-themed bookmark from Galaxy Books that we picked up on our last trip to Sydney. My all-time favorite is the card that was attached to the first bunch of flowers Dave sent me, although that's currently languishing in a Wheel of Time, silently and scornfully marking the place I gave up on the series for the second time (towards the end of Book 4 - I made it as far as Book 9 the first time).

I also tend to hoard tags of clothes that are nice quality and bookmark-sized, and stash them next to my bed for when I need an emergency bookmark. And I'm not averse to using a scrap of paper in a pinch - store receipts work well in this regard. They're also perfect for shredding to make minor place markers - for example, a quote I like, or something I want to research.

I inherited a beautiful bookmark from my grandmother, but it's so pretty I haven't used it yet. It's currently on display on top of my jewelry box: 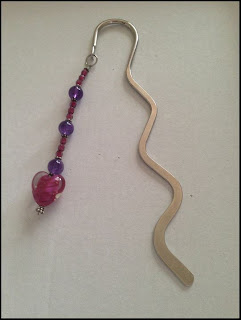 Of course, because I have a Kindle now I'm needing bookmarks less and less often. But I still treasure them. My Dad laughed at me recently when I gave my Mum a combination gift of a Kindle case and a hand-made bookmark. But I think Mum understood.

This post is part of the above Posting Challenge
Posted by Jen D at 9:52 AM No comments: Links to this post

Another 2-for-1 deal, oops! My excuse for missing last week is that I drove up to Brisbane and back on Sunday for Dave's final tattoo session. I'll do a post on his tattoo soon, once it's fully healed.

While I don't have a specific reading nook (one day...) I do have the world's comfiest couch. This couch is huge and soft-but-firm, deep enough and long enough to sleep on but with plenty of cushions to pile up to get comfortable, with plenty of room for both of us, one of the cats (they tend not to socialise together) and Phoebe (if she's lucky). It's overlooked by some of our bookshelves (yes, there's plenty more), has the laptop within easy reach if I need to look something up (which I do frequently while I read), and has an excellent view of the TV if I want to have the rugby or cricket on in the background. The only thing I'm missing is a decent reading lamp - the lamp in the picture 1) has a blown bulb, and 2) points up, not down.

Week 8's topic: Share some of the other book blogs you love to follow, who have inspired you, or who have become your online besties.

Apart from Bookish Ardour, I only follow one other "dedicated" book blog: The Well Read Kitty - a fellow Kiwi. I have just added BookieMonster (another Kiwi) after she was linked from The Well Read Kitty. Some other bloggers I follow, like Miss RBit, also do book reviews and talk about reading and books. As I read more book bloggers, I'll find more that interest me - blog reading has a bit of a snowball effect. I've finally found a more-than-adequate replacement for Google Reader - Feedly. If you're looking for an RSS reader to replace Google Reader, I highly recommend this one.

I'll try to get back on track with a post a week, I promise!

This post is part of the above Posting Challenge
Posted by Jen D at 6:00 PM No comments: Links to this post

Progress slowed down a bit in May: I went through a bit of a gaming phase, picked up XCOM: Enemy Unknown, and somehow lost a fortnight. According to Goodreads, I'm still 3 books ahead of schedule for my official goal of 45 books, but that puts me 1 book behind my unofficial goal of 52 books. There's a long weekend coming up though, and we have a 2-week holiday in July, and my gaming phase has given way to another reading phase, so I'm not worried...yet!

In May I finished reading The Casual Vacancy and The Name of the Wind. Sadly, The Casual Vacancy was a great disappointment. I gave it 2 stars on Goodreads and felt that I was being generous. Like I said in my review, if it had been anyone other than Rowling I doubt I would have persisted. Most people I know who have read the book (including my Mum and Miss RBit) were of similar opinions. I can't think of anyone I would recommend this book to.

The Name of the Wind was, happily, much more enjoyable. I wasn't actually planning on starting this series just yet, but early in the month we went up to Brisbane for Dave's second tattoo session so I had a day to kill reading. I was nearly finished The Casual Vacancy but didn't want to cart a doorstop around with me, so I took my kindle thinking I'd start one of the non-fiction books on my list. I sat down, pulled out my kindle...and it was flat! You cannot imagine the horror. Luckily, Dave had his with him also (well, of course he did, why am I saying "luckily"?), but the only book on my reading list that was also on his kindle was The Name of the Wind. So, while not quite according to plan, at least I did start a really excellent book. You can see my review here. I started the sequel, The Wise Man's Fear, last night, after borrowing it from a friend. It's a much longer book (around 1000 pages), so I don't know how long it will take me. Unfortunately, the projected trilogy isn't finished yet - so depending on how long it takes Rothfuss to complete, I may end up having to do a re-read.

I also finished listening to A Game of Thrones on audiobook and started A Clash of Kings, I'm not sure I like Roy Dotrice's voice acting as much in this one. The way he pronounces Melisandre, with a huge over-the-top emphasis on the penultimate syllable ("mell-e-SOND-r") is a little grating, as is The Onion Knight's thick pirate accent. Still, it's good to have a cheat's way to re-read these huge books without eating in to my Off The Shelf reading time.

While I consider listening to A Song of Ice and Fire on audiobook only minor bending of my Off The Shelf rules, I do have some out-and-out rule-breaking coming up. The same friend who loaned me The Wise Man's Fear also loaned me Vernon God Little by D. B. C. Pierre. And who am I to turn down the loan of a book? So that will be up next after The Wise Man's Fear. I'm also being pestered by Miss RBit to read a book she highly recommends - The Art of Racing in the Rain by Garth Stein. Frankly, I'm surprised I made it 5 months without straying. At least they're both short and quick reads. It just means I have to work extra hard to keep up with my Off The Shelf reading!

If you want to see my rating and/or review of each book, check out my Goodreads page. 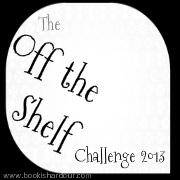 This post is part of my Off The Shelf 2013 Reading Challenge
Posted by Jen D at 4:00 PM No comments: Links to this post