In the last edition of Jen Does PC Repair I talked about Dave's aura that interferes with electronics. I've since read The Dresden Files series and I'm convinced he's a wizard of some kind (one of the traits of wizards is just such an aura).

Last weekend we went to the inaugural PAXAUS (more on this in a later post) and while there we bought Dave a new graphics card (a Gainward GeForce GTX 760) to replace his old crossfired Radeon 4770s. They wouldn't run DirectX 11 and we could get a really nice deal at PAX (with lots of free swag) so we went for it. We got home yesterday and I installed it straight away and everything seemed fine...until his PC randomly switched off after a few hours. I figured we'd kicked a cable or something and didn't think much of it until it did it again today, and I realised it was ridiculously hot - his CPU got up to 87C. The power supply wasn't overloaded at all - it's rated for 620W and he's only running about 130W - but it seemed like the extra heat from the new card was too much for his case cooling to handle. So we carted it down to Umart to discuss it with them.

They said a first quick fix would be to just get some new thermal paste for the  CPU cooler, but since it's the middle of winter and we were already having cooling issues we decided to upgrade the CPU cooler to a water cooling system. The Umart guys suggested the entry-level Corsair Hydro Series H60. Unfortunately, they weren't available to do an install until early next week. Having just returned from 10 days of no PC (in the middle of the Steam Summer Sale) and with 4 more days before he has to go back to work, being PC-less wasn't a very favorable option. So I decided to take the plunge and install it myself. 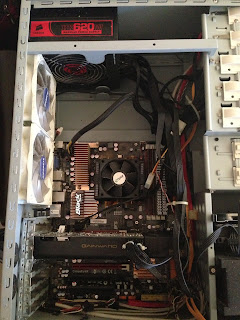 The original setup: 2 system fans and a basic CPU cooler

Note the shiny new hulking beast of a graphics card under the fans. I removed the two old fans and the existing CPU cooler and cleaned off the CPU. The thermal paste was pretty patchy so it's possible that just replacing the paste might have been enough, but I decided not to risk it.

The existing setup had 3-pin fans and a 4-pin CPU cooler. Once I had them removed and was ready to install the new system, I discovered that it had a 4-pin fan and a 3-pin CPU cooler. This was a bit annoying because the fan wouldn't fit in the header extender cable the old fans were on. After some Googling and some discussion with a friend I decided to just reverse them: the new fan would plug in the "CPU fan" header on the motherboard and the new CPU cooler would plug in the "system fan" header.

Once the radiator and fan were mounted, I prepared the new cooler mounting bracket and lined it all up. Luckily, his motherboard and CPU setup meant there was already a mounting bracket in place so I didn't have to remove the motherboard, I could use the existing bracket. Careful application of the new cooler (it had pre-applied thermal paste) and a few twists of the screws and we were done. Dave helped by holding the torch and various parts so it was a team effort. 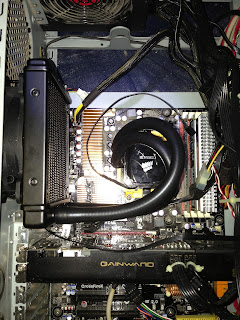 New hulking beast of a radiator plus OMG water hoses

Because we got giant cases there was plenty of room for the radiator and hoses. They're not bent or angled sharply so hopefully they don't spring a leak. It has a 5 year warranty and we're planning on upgrading completely within 12-18 months so I'm sure it'll be fine.

The PC booted and everything seems to be running fine, the CPU is currently around 55C. I'll keep an eye on it over the next week or two and if all seems fine I'll look at doing the same upgrade for my own PC.

This was the most complicated hardware install I've done so I was quite pleased with myself for getting it all sorted and working with no dramas. It was much easier than I was expecting, I think mainly because I didn't need to worry about installing a mounting bracket as there already was one. Hopefully I've fixed the random shut down issue and we're prepared for the long hot Gold Coast summer.
Posted by Jen D at 6:38 PM